CC3 is the most accurate warfare simulation video game yet!

Before playing the game, gamers are prompted to sign in with their twitter, facebook, myspace, yahoo accounts and more. Gamers are able to enter in more than one entry for each, allowing them to encapsulate all of their online identities.

CC3 has one additional twist – when you die in-game, instead of restarting at the beginning of the mission, the game self-destructs but not before it sends a “lock” message to all of your social networking accounts, preventing you from logging in ever again, effectively freezing them in time for ever more. This makes it the most accurate warfare simulation ever!

A badly-written note will also be sent to your mother.

The first time I went to Dublin, I brought back souvenirs for family and friends. I remember that for my dad, I bought a Guinness mug, like this one.

My dad didn’t really have much use for it, so it sat in the cupboard for a while, unused. At some point I adopted it for my own – I can’t remember whether this happened while I was still living with my parents, or when I moved out, or whether I actually claimed it during a visit to their house after I had already moved out.

For many years, it has been my “office” mug, and has contained maybe 1000 cups of tea or coffee per annum.

This was an utterly pointless anecdote.

You want to know just how frothy these beers are? Take a look at this. 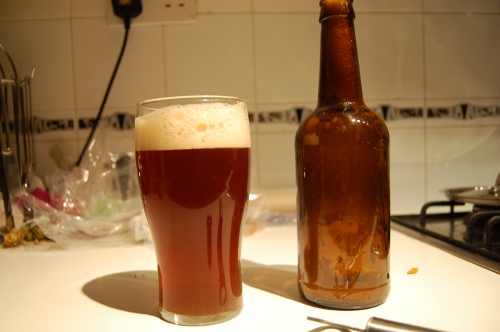 The pint glass containing the other half pint of froth is out of shot.

I think I may have made a mistake at some point.

(but that’s not the point really. It’s a learning experience.)

My sister bought me a Brubox for my birthday. Here’s what it looked like a few weeks ago when I set it up: 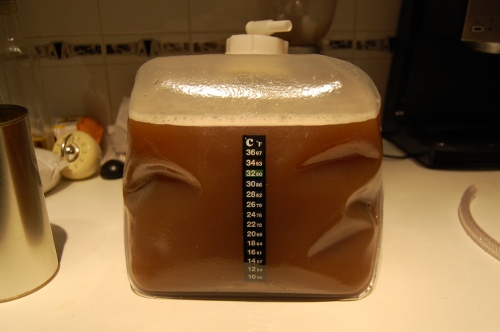 And here’s how the bottles look now: 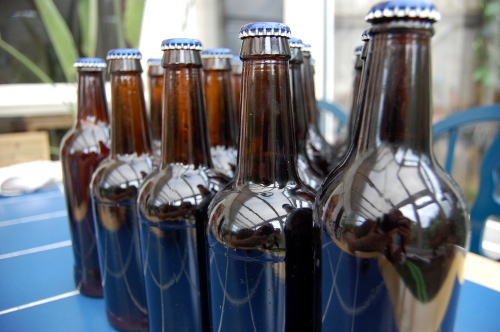 The brubox generated 17 bottles of beer in total. I’ve already had a couple over the last week. I found it quite difficult to get the last few pints out of the brubox without whipping up all the yeasty deposits, so I’m expecting some variety in the quality from bottle to bottle, though the majority should be fine. Indeed, of the two bottles that I have tried so far, one of them was (I think) the last one out. I wouldn’t say that it was revolting exactly, but it certainly seemed very strong and very fizzy. The other one was delicious though.

I think I’m going to wait until spring before I do another batch, because otherwise the garage will be too cold for fermentation. The next one will be a mild or porter, I think.

At the weekend, I tried to teach Bernard about “knock, knock” jokes, and made a complete mess of it. So over the last few days, we’ve been hearing a lot of variations on the following themes. Warning: surreal humour follows.

This last line is delivered in a sing-song voice and with a cheeky smile that leaves you in no doubt that it is intended as the punchline. If you dare to go further, then you’ll be rewarded with something like:

It’s an absurd and surreal brilliance. 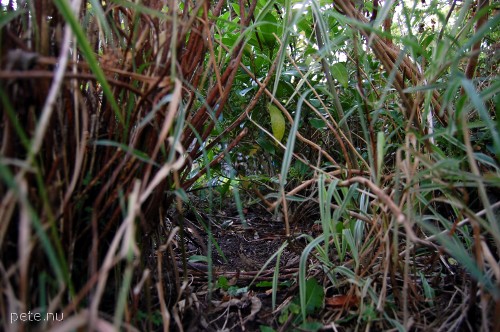 Over the course of the last year, Maisy’s repeated use of a shortcut across the garden has resulted in the erosion of a *Maisy Tunnel*, through which she can dart at phenomenal velocity. I tried taking a photo of her rocketing through, but I think I’m going to need stronger light and a higher shutter speed for this one. 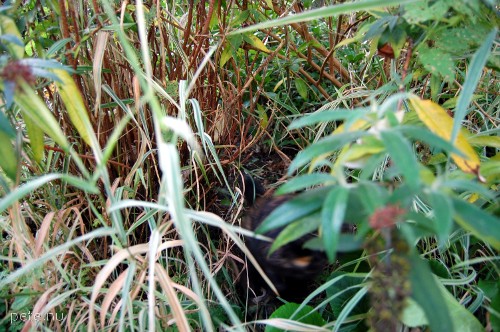 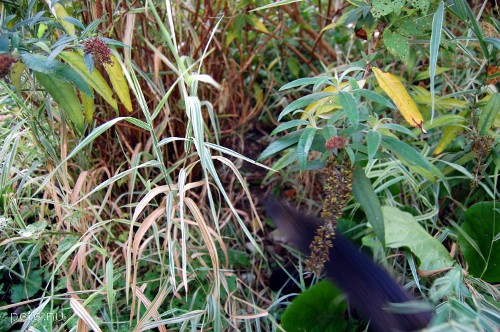 Maisy has a infra-red catflap. When we first got it, she was terrified of it – each time she approached it, there’d be a tiny click as the mechanism unlocked, and she’d run a mile. Eventually she settled down, and things were good for a while.

Then there were a few hitches. Firstly, she lost her collar one day, necessitating the purchase of a replacement key ((as seen here and here)). Secondly, the keys wouldn’t always work, which led to many, many battery changes to try and find the source of the problem. By the time she lost her collar for the second time, she’d already figured out a way to bypass the lock on the catflap. So now we let her roam the neighbourhood *sans* collar ((though she is microchipped, I hasten to add)).

So may I introduce to you: the Maisy Method. 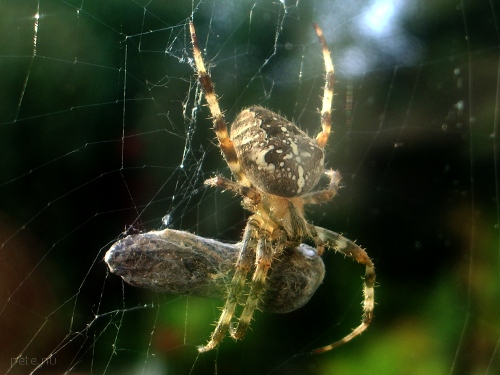 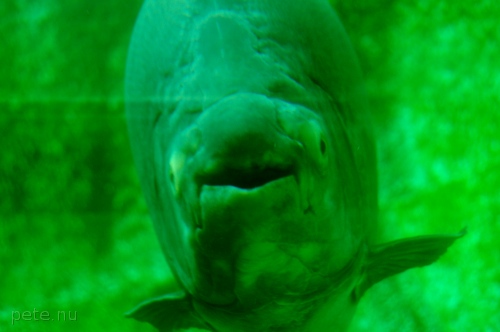 Hi, remember me? I’m the guy who hasn’t given you a non-stunt post since early May. It’s probably time I caught up.

I’ve got a couple of party gigs coming up in July, one for my regular band, and one wedding gig for an irregular, ad-hoc band formed expressly for the purpose. I’ve been learning a lot of new cover versions. *Brown-Eyed Girl* is in both sets.

Since December, Karen and I have discovered How I Met Your Mother and Hustle, and also embarked on a project of watching Friends and The West Wing “cover to cover”. We’ve actually been watching less television than last year.

Towards the end of March, I started reading the books in the Earth’s Children series by Jean M Auel. I’ve been finding them interesting, hence getting through them at a rate of one book every 2 or 3 weeks. That’s quick, by my standards – I’m a fast reader, but I don’t tend to devote much time to reading. I’m now very close to finishing the fifth (currently the last published) book.

Not much of this actually. I haven’t had as much enthusiasm for it this year. There seems to have been quite a lot of rainfall in the last couple of months, which deters me somewhat. Last year I think that I cycled a lot because the regular exercise helped my mood, but this year my mood seems to be (mostly) just fine without it.

One of the greatest games of all time, in my opinion, was *Zelda IV: Link’s Awakening* on the Game Boy. It’s been a source of sadness to me that there was never a sequel. I once bought a game called Quest For Camelot that looked like it might be similar, but it fell far short. In fact, one of the reasons why I disliked it was that the main character’s sword did, literally, fall far short. She had about half the reach of Link (the main character in *Zelda IV*) which led to much frustration.

Anyway, thanks to the wonder that is emulation, I’ve started playing through *Zelda III* which is the SNES predecessor to *Zelda IV*. Seems to be incredibly CPU-hungry on my computer, but we can live with that. UPDATE: I’ve fixed the CPU problem by experimenting with different display resolutions, and I’ve also improved the sound quality by using the sdl audio driver.

Chilling with the boy

Yesterday we went to Legoland for the afternoon. It was awesome. As you can imagine, not many people go to Legoland on a grey Thursday during term time. As a result, we managed to get on more rides in 3 hours than we usually do in an entire day. Also, packed lunch + annual pass = incredibly cheap day out. I quite wanted to take Bernard onto his first rollercoaster, but he preferred to just watch it go round. He doesn’t like fast rides yet, but he assures me that he will when he is older. Of course, when he’s older, we won’t be able to go to Legoland on grey Thursdays during term time, so we won’t be able to enjoy the benefit of being able to board the rollercoaster without queueing, but I didn’t want to pressure his decision by burdening him with this information.